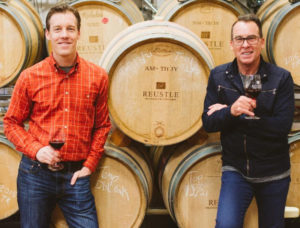 When asked about this year’s competition, Owner/Winemaker Stephen M. Reustle stated it was nice to see how consistent the wines perform from year to year. “Each year, SavorNW is a tough competition with wines from across the region vying for top honors.” Reustle continued, “It is nice to see our wines consistently perform well at this competition. With everyone sending their best wines to compete, it is rewarding to see our wine held in such honor. It tells me we are doing something right. SDG”

Known for his ability to craft award-winning wines across the spectrum of wine, Owner/Winemaker Stephen Reustle demonstrated his ability with red wine and white wine varietals as well as his dessert wine. As the United States first commercial producer of Grüner Veltliner, Reustle possesses a great deal of experience with this up and coming grape varietal, which tends to be at the top of the leader board in any competition winning this year’s “Best of Class” for his 2016 Grüner Veltliner-S and a Gold Medal for his 2016 Grüner Veltliner – Estate.